A quick overview of sustainable design strategies and guidelines 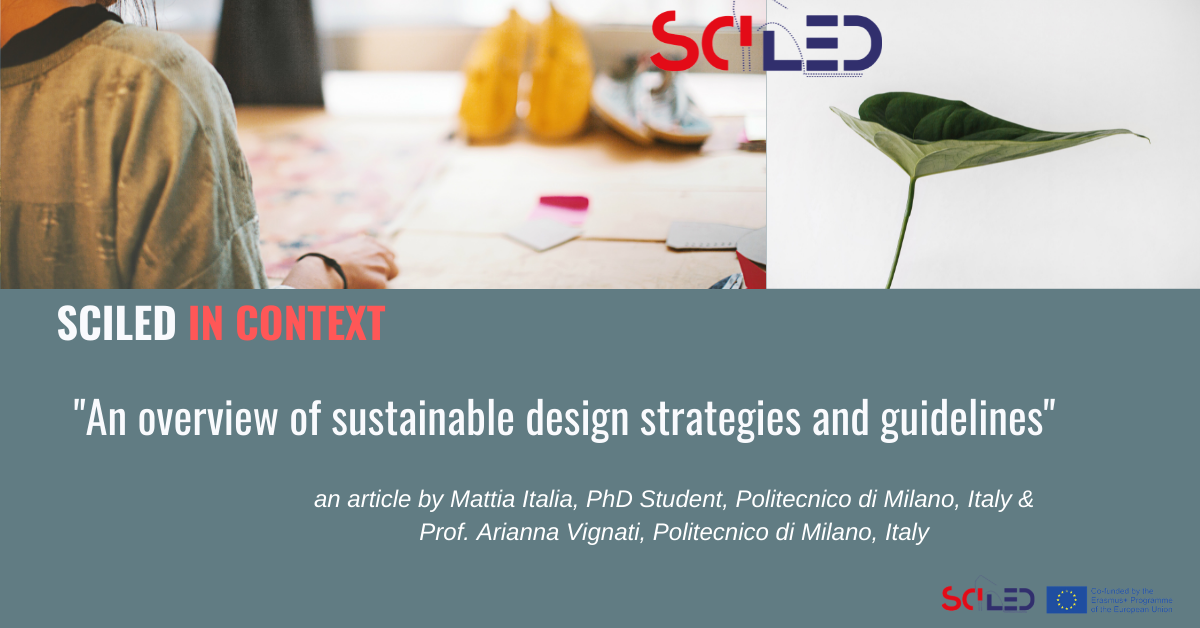 We can say that in the last decade the word sustainability has become a buzz word, a word on everyone’s lips. The issues and meanings behind it are important and the fact that people are talking about it is a good thing, but the risk of it becoming an empty, meaningless word is real (Vezzoli & Manzini, 2008). Although it is a word that leaves many interpretations, the most widespread definition is that of the United Nations, which defined it as development that meets the needs of the present without compromising the ability of future generations to meet their own needs (UNWCED, 1987).

It goes without question that in order to promote concepts of this magnitude, radical changes are required, permeating society and culture as a whole. Among these, the design culture was also immediately affected, creating philosophies and design approaches that attempted to meet these principles. It was at the beginning of the 1990s that design reached an understanding able to promote approaches such as Design for Environment (DfE), which can be compared to a large, constantly changing pot (Giudice, 2007).

At first, this was joined by green design and eco-design, defined by many as approaches capable of promoting new objects that are simply ‘less bad’ (den Hollander et al., 2017; Moreno et al., 2016; Giudice, 2007; McDonough & Braungart, 2002). Next came Sustainable Design, which also includes social issues (Moreno et al., 2016). Finally, we arrived at the modern concept of DfE alongside that of Life Cycle and Circular Economy, which already consider the sustainability of the entire process and product system at the design stage: Circular Design was thus born (Ruokamo & Casalegno, 2020). In conclusion to this very brief historical excursus, it is important to make a clarification: sustainability and the terminology associated with it are still topics under great ferment; online and in the scientific literature it is, in fact, possible to find different terms associated with similar concepts and vice versa, this does not exclude their validity, but simply puts the spotlight on different aspects in an evolving theme.

In order to translate the new knowledge about sustainability into design practice, and to make it able to guide designers in the realisation of products and services, several strategies and guidelines have been implemented. Strategies to reduce the impact of a product or service on the environment are numerous, exploring the literature it is possible to find dozens of them. Useful Life Extension, End-of-Life, Product Durability, Product Integrity, Maintenance, Recyclability, Reuse are just a few but the list could be very long (Moreno et al., 2017; den Hollander et al., 2017; Bocken et al., 2016; Allwood et al., 2011; Vezzoli & Manzini, 2008; Giudice, 2007). These strategies also vary greatly depending on the objectives, requirements and different filters that can be applied to research and design.

Navigating through the plethora of information, however, it is possible to see that although some of these strategies are repeated under different names – as mentioned above because of the turmoil in the field of sustainability – they represent and include the same objectives. In fact, many of the strategies can usually be framed, or brought back, under the umbrella of Design for X (DfX), a very common term that represents the holistic approach advocated by DfE but at the same time representative of Circular Design (Moreno et al., 2016). In Design for X, the X stands for a property, a feature, of a product that characterises it, some of the most significant strategies are Design for Repair, Design for Reuse, Design for Remanufacturing and Design for Recycling. All of these strategies are useful for the design of sustainable footwear and can be found in the SciLED project reports.

Even if some of these strategies are self-explanatory and indicate a clear direction, it is possible to go into further detail for their practical application through more specific guidelines. Authors such as Moreno, et al. (2017), Vezzoli (2014) and Giudice (2007) in their texts provide tools and long lists containing guidelines, clustered following design strategies. The footwear world has also its own guidelines, in particular, the European project GreenShoes4All, connected to SciLED, has listed some of them in its online guide. For example, in order to achieve repairable and recyclable footwear, it is recommended to design shoes that can be easily disassembled, or to promote recycling, it is useful to think about partnerships that make it easier to collect waste footwear. For a complete overview of the various strategies and guidelines, please refer to the document in question.

In conclusion, we can point out that despite the confusion in terms of vocabulary, various tools and guides have been created over time to support designers step by step in the creation of sustainable products. This text is not meant to be exhaustive, however, it aims to introduce the reader to the topics related to sustainability and to provide some basic tools and perspectives used within the SciLED Knowledge Alliance.